After 72 years, the National Archives has released the full set of records comprising the 1940 Federal Census: a milestone event for historians and genealogy researchers searching for documentary material of New Deal and Depression-era America. But until the records are indexed (most likely by a commercial service such as Ancestry.com or FamilySearch.org), finding a name among the millions of handwritten records is like looking for a needle in a haystack.

Research questions: get in touch with a NYPL librarian

The Sixteenth United States Federal Census is an exciting and important document. It describes the lives of Americans caught between two cataclysmic events in the country's history. When the 1940 census was taken, the nation was still in the throes of the Great Depression, with 14.6 % of the population out of work, but not yet caught up in the Second World War, a soon to be global conflagration that was, ironically, to put an end to years of economic hardship. Using Direct Me NYC 1940enables you to explore the 1940 census, and, in doing so, the lives of individual men, women, and children - possibly your parents, grandparents, or great grandparents - who lived in New York City during historic times.

About the Milstein Division

The Irma and Paul Milstein Division of United States History, Local History and Genealogy is located in the New York Public Library's Stephen A. Schwarzman Building on Fifth Avenue and 42nd Street. The Milstein Division collects materials documenting American History on the national, state and local level, Genealogy, Heraldry, Personal and Family Names, and Flags. As one of the nation's largest publicly accessible and non-membership genealogical collections, the Milstein Division is a national resource. Cited in most family history handbooks, the Milstein Division is a mecca to researchers from around the world. Its extensive holdings and helpful research services are used each year by thousands of family historians, scholars, students, city planners, television and film producers, creative writers, visual artists and anyone interested in history. Learn more about our world-class collections, and follow the activities of the Division through our blog, Flickr, Twitter andFacebook pages.

NYPL Labs is an experimental unit at the New York Public Library developing ideas and tools for digital research. A collaboration among curators, designers and technologists, NYPL Labs is dedicated to rethinking what a public research library can be and do in the new information commons. We develop everything from proof-of-concept pilots to fully realized web applications and digital archives, as well as hosting a variety of staff workshops and public talks. Building on the Library's public mission, Labs also seeks to foster collaboration with NYPL users through crowdsourcing and participatory initiatives, and shares tools and data with the wider library and digital humanities communities.

his digitized collection of thousands of fashion drawings and sketches produced by André Fashion Studios between 1930 and 1941 is the result of a partnership between the Picture Collection of The New York Public Library and the Special Collections & FIT Archives of the Fashion Institute of Technology Library. The partners aimed to virtually unite a collection of spectacular quality and historical significance that is physically divided among the two institutions and, as an equally important goal, to leverage open-source technologies to create a prototype of a fashion information and image portal that would provide access to costume and fashion-related resources held by various New York City educational and cultural heritage institutions.

This site is the initial realization of that broader goal, and brings into focus a group of materials that have until now been accessible mainly to researchers. The collection consists of original, hand-colored and reproduced fashion drawings from André Studios, one of a small number of competing design studios that created fashion sketches to sell to clothing manufacturers in the United States and Canada on a weekly basis. Pearl Levy Alexander and Leonard Schwartzbach were partners in André, with Pearl creating the designs and Leonard acting as the salesman. André specialized in children’s coats, and ladies coats and suits, and produced about 20 sketches a week for most of the year, beginning in 1930 and ending in the early 1970s. The site showcases the first decade of the firm’s output, up until the beginning of World War II, an oeuvre of significant proportions providing unique insight into fashion trends for women and children during the 1930s. Click here for more information about André Studios and the fashion industry in New York City in the early decades of the 20th century.

The collaborative digital project “André Studios 1930-1941: Fashion Drawings & Sketches in the Collections of the Fashion Institute of Technology and The New York Public Library” was supported in part by funds from the Metropolitan New York Library Council (METRO) through the New York State Regional Bibliographic Databases Program.

Explore an exciting period in the history of fashion through this spectacular collection of drawings and sketches produced by the New York firm André Fashion Studios in the 1930s and early 1940s. Browse seasonal designs like winter wear for 1937-38, search for costume components like scarves, collars,blouses, peplums, and raglan sleeves, or enjoy the artistry of famous designers like Chanel, Balenciaga, Schiaparelli, Lelong,Patou and many others. The result of a partnership betweenThe New York Public Library and the Fashion Institute of Technology, this site aims to inspire today’s designers while also documenting the significant role of New York’s fashion industry in the history of 20th-century fashion. An additional goal is to encourage continued fashion-related digital collaboration among cultural heritage institutions in New York.

In 1943, four local newspapers published a New York City Market Analysis. Largely forgotten in the 70 years since, the document provides an amazing window into New York's neighborhoods of that era.

The 250-page Market Analysis provides hundreds of photos & color-coded maps, statistics, and short narrativesabout neighborhoods across the city. The statistics and maps are based on the 1940 Census, providing a rich complement to the individual 1940 Census records that are available online. 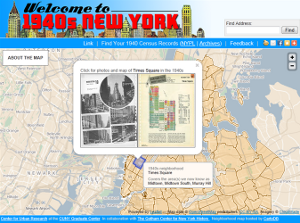 The Center for Urban Research at the CUNY Graduate Center is making the 1943 profiles available to provide context for the 1940 Census records and to offer a research aid to historians and anyone else interested in learning more about New York from the 1940s. Read our announcementfor more info.

Our Welcome to 1940s New York website displays a map of New York divided into the 116 neighborhoods that are covered in the 1943 Market Analysis. You can:

We have also analyzed some of the demographic changes in New York City between 1940 and 2010. Please visit CUR's website for more info.